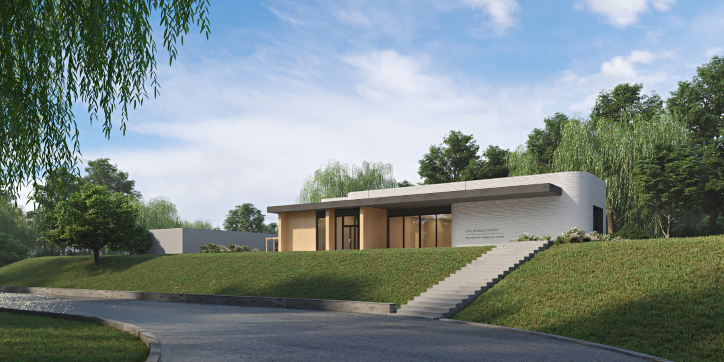 Shortly after the outbreak of war in Ukraine, Team4UA was founded by tech entrepreneurs to help the Ukrainian people cope with the aftermath of war.

Team4UA has launched the pilot project Hive: A 3D printed school in Lviv aiming to create an educational building of 350 sq. m. to host a primary school, mainly for internally displaced children in Lviv (Western Ukraine). In a worlds first the team will be using 3D construction printing technology to build this school facility in a warzone, in Ukraine. The pilot project quickly responds to the increasing number of children in Lviv and lack of schools to receive internally displaced children, while the global objective is to prove the possibility of using the 3D construction printing technology to build faster, more efficiently and in a more sustainable way in order to scale and to respond to the shortage of social infrastructure and housing in Ukraine caused by the hostilities.

Over 2,000 schools have been damaged or destroyed in Ukraine since the beginning of the Russian invasion on February 24. Around 13 million people fled their homes, and around 8 million of them are internally displaced whithin Ukraine. Today Lviv accounts for over 250 000 internally displaced people, 75 000 of which are children. The region experiences an immense lack of educational infrastructure for young students.

The premises with 4 classes are conceived to receive 100 pupils of the primary level education in the morning (6-7 years old children) and around 100 pupils during after-classes activities (children and teenagers of different age). The building is an inclusive space able to receive all the categories of pupils, including special needs students.

Since the building is a sustainable weatherproof construction, in can be used for more than 20 years, 2000 children would benefit from the space by following primary education classes and 2000 more would benefit from it during after classes activities and workshops.

Additionally the team is now working on its Humanitarian Situation Platform. With its unique needs assessment, this tool could be used to implement targeted aid for people in need in Ukraine even more efficiently.

How to receive a donation receipt?

If you need a donation receipt please include your address at Paypal donations and write us an email to donate@we-aid.org. Please include the following information in your email: